Quote for the week

“Let nothing disturb you. Let nothing make you afraid. All things are passing. God alone never changes. Patience gains all things. If you have God, you will want for nothing. God alone suffices.”

Bells have long been associated with Christian worship. While many churches might have a single bell, St Bartholomew’s is fortunate to possess a ring of six bells which is effectively a musical instrument in its own right. The bells are hung for ‘full circle’ ringing. 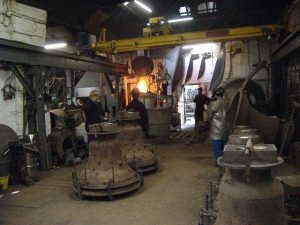 The new bells were consecrated by the Archbishop of Melbourne on Sunday 24 August 2014, on the Feast of St Bartholomew, before a large congregation gathered for Choral Evensong. 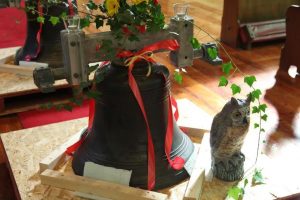 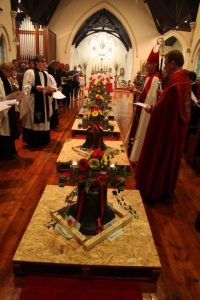 Access to the ringing room is by spiral stairs, with a handrail, from inside the base of the tower.

Visitors, both ringers and non-ringers, are always welcome. A small rope fee applies to overseas and interstate visitors.

We would welcome anybody (church people or non-church people alike) interested in learning how to ring. No special requirements are required though a reasonable sense of rhythm and the ability to catch a ball are helpful!

Current ringers encompass a wide range of age groups and occupations, all united by a common interest. Individual ringers range in levels of competency from beginners to advanced. After having learnt the basic techniques of bell handling, ringers might visit other towers to ring. Often the St Bartholomew’s ringers are joined by ringers from other towers including overseas visitors (from United Kingdom in particular). Many ringers belong to the Australian and New Zealand Association of Bellringers (ANZAB) which promotes and fosters change ringing and publishes a bi monthly magazine. See www.anzab.org.au

When do the Tower Bells ring?

We also ring for special services in the life of the church and by request for weddings and funerals.

The original bells at St Bartholomew’s were unique.  Cast by the Australian firm of John Danks and Son in 1927 and 1929, they were the only Melbourne-made set of bells hung for full circle ringing. The bells were acquired through a bequest of Mrs Agnes Challingsworth, a foundation member of the parish who died in 1927.The first bell was dedicated on 6 March 1927.  A further seven bells (funded by Mrs Challingsworth’s bequest) were blessed at Evensong on 3 March 1929.  The bells were rung for the first time by a band of ringers from St Paul’s Cathedral.  The tenor (or the largest) bell weighs approximately 256 kg and the weights range in size down to the treble (or smallest) which weighs approximately 40 kg. The eight Burnley bells were originally hung ‘dead,’ or immovable, from two parallel girders.  They were sounded by the Danks ‘Patent Clapper and Trigger,’ which obviated the need for the bell to be swung.  Instead, by pulling a rope the clapper was impelled against the inner face of the bell.  This had one very important advantage: in the absence of a team of eight ringers the bells could be sounded by four ringers each handling two ropes.

The bells were re hung for ‘full circle’ or ‘change’ ringing during 1988/89 in conjunctionwith the celebration of the bicentenary year of European settlement in Australia.  During the renovation a spiral staircase was installed to improve access to the ringing chamber.

A local band of change ringers was formed shortly after the bells were rehung and has continued since 1989.